The histogram for an image and the overexposure warning are meant (in theory) for objective verification of the image while shooting and adjustment of shooting parameters according to the indications in the preview window one can see the overexposed areas right away, and the histogram displays the overall distribution of tones on the shot.

There are, unfortunately, a few problems that complicate the usage of these great tools:

The impact of the white balance on the histogram can be turned off using UniWB (sorry, russian-language article translated by google, to be translated manually) but other settings cannot be turned off, only adjusted.

The goal of this article is to elaborate on the procedure of juxtaposing the camera histogram and the real raw data, as opposed to merely provide settings and numbers. This, among other reasons, was why the shooting conditions were not exactly typical.

We used a 5D Mark II camera with a 2.0.9 firmware and at 200 ISO. For other cameras, different shooting conditions, possibly other ISOs, and other firmware, separate measurements are to be performed.

We were shooting on a spring day in a room with the windows facing west. The lighting source was the very bright and very clear blue sky, the lighting color temperature (measured with a Minolta ColorMeter IIIF) was between 8800K and 9900K. The temperature was remeasured after every batch of photos was taken.

For such unusual conditions, the exposure meter has to be calibrated in order to determine the headroom in highlights for a given camera.

Take a grey (white) card, expose it twice - according to the exposure meter, and with a guaranteed overexposure (+5-6 stops, maybe more). In our experiment we got the following numbers (slightly rounded):

The auto white balance for the camera won t adjust that much, but if you manually set the white balance for 9900K (corresponding to the real lighting spectrum) this will provide for balanced peaks of the histogram. 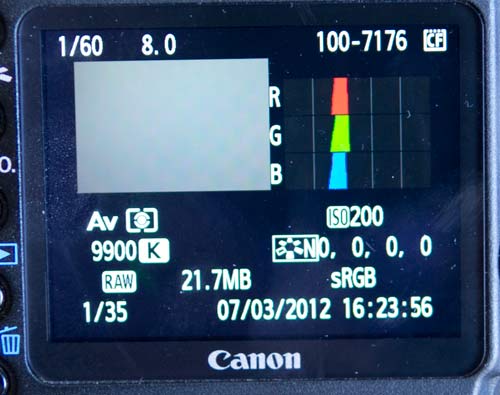 Let s take a note: the halftones ( grey according to the exposure meter )

It is clear that the lighting is far from ordinary, but that makes it more interesting. For standard conditions, the photographer can simply memorize ( open up half a stop from what is indicated by the camera ), but can you trust the camera controls in non-standard conditions that is an important question.

It is boring to shoot a scene with one peak, but it is hard to decipher a histogram of a complicated scene. So lets place a monotone object that is darker than the background of a color or neutral backdrop. The scene with a neutral background looks like this: 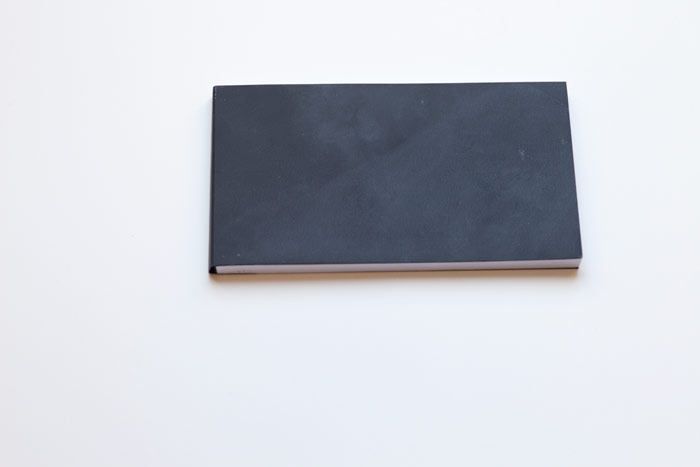 For the color background a piece of red cloth was used, thus the scene looks like: 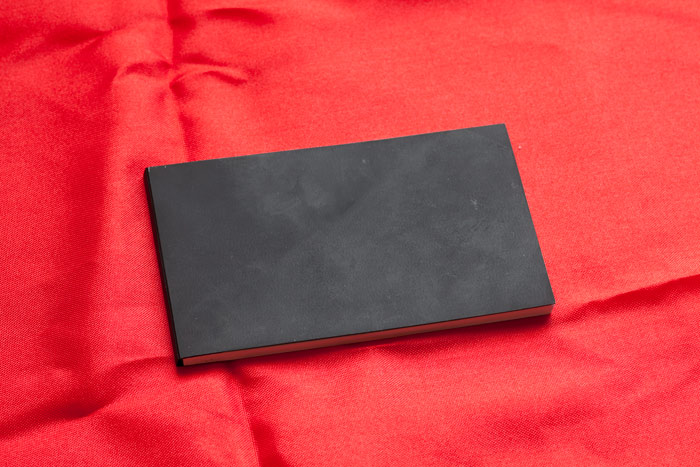 All in all, there are a lot of combinations, so in this article we will examine only the most interesting ones.

The shots with the red background were shot after the shots with the neutral one, and due to the time difference, the lighting changed (the color temperature dropped to 8800K, and the luminance changed), therefore we cannot compare the exposure in the two series.

The histogram behavior is easier to examine on the neutral image.

4 shots with exposure intervals of 1 stop (the exposure data is seen on the images): 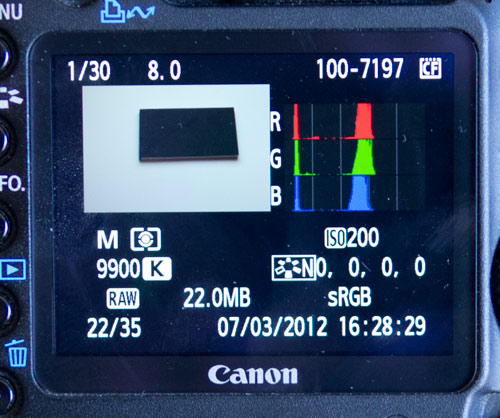 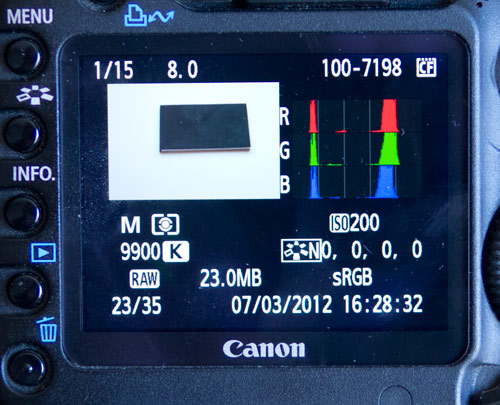 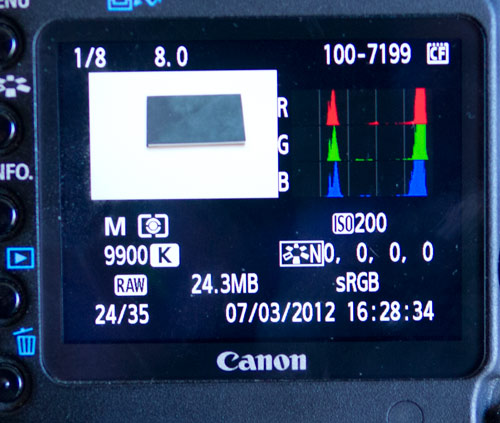 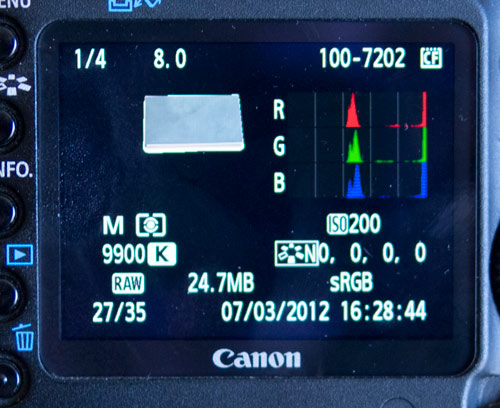 (on the last shot - Picture 7. - the white fell into the overexposed range, so we will examine that a bit further).

As we can see, for a 1 stop shift of the exposure, the right peaks of the histogram shift approximately (but quite faithfully) by one tick along the histogram.

We can see that with the given settings, the horizontal scale of the histogram is non-linear. A 3-stop exposure shift corresponds to

The total width of the histogram is about 6 stops.

The real raw data histogram looks slightly different. Here is a histogram for the exposure of 1/15 (the second shot from the above-shown series - Picture 5.). 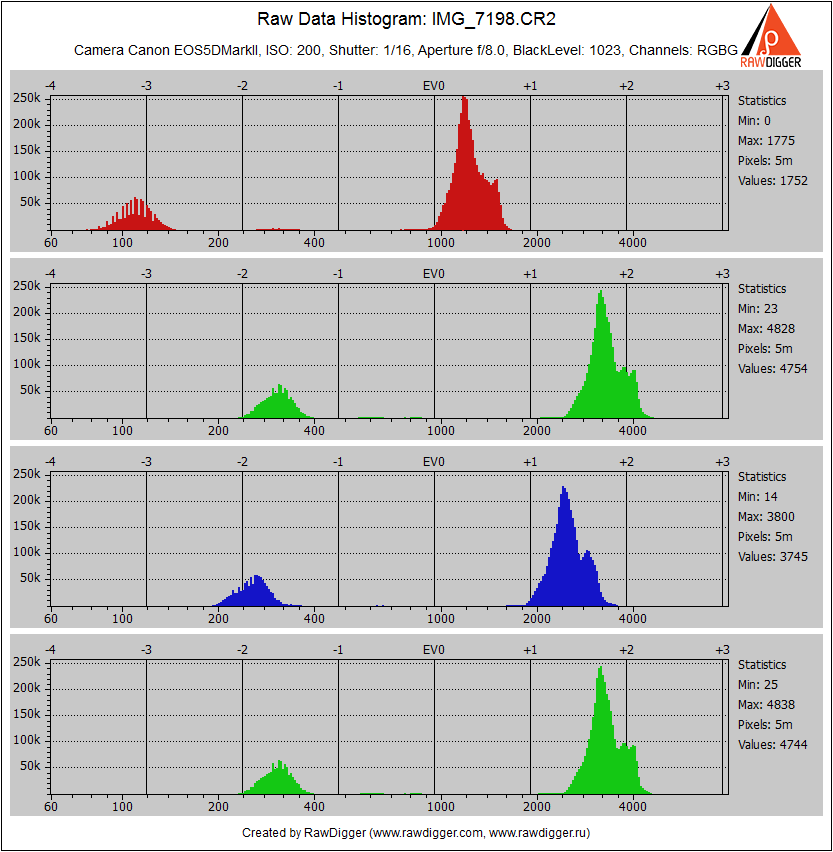 We can see that:

The camera histogram spikes and overflows upward, with the right peak going towards infinity, as we cannot see its actual height. We can also not see the step on the right peak.

Playing with the display parameters of the in-camera histogram, we can approximately understand how it is set up:

Overexposure indication on a monochrome shot

To study overexposure, we selected exposures from 1/8 (the camera does not show overexposure) to 1/4s (the camera shows that the highlights have been blown out, on the white background), with the minimum possible exposure step of 1/3 EV.

What about the raw data histogram?

Therefore, for the standard contrast and saturation settings (Neutral setting) the overexposure indication is approximately .5 stops more conservative than it should be the indication turns on at 1/6, and an actual overexposure can be observed at 1/4 s.

Therefore, with a lowered contrast setting, the camera continues to indicate overexposure even when it s not present, but the overstated indication is closer to reality and more acceptable, since the difference between real raw blow-out and in-camera warning is now less than 1/3 stops.

The scene with the color background is interesting because the peaks in the green and blue channels for the background and for the black subject are almost identical.

Here is the camera histogram for exposing according to the exposure meter and low contrast setting. 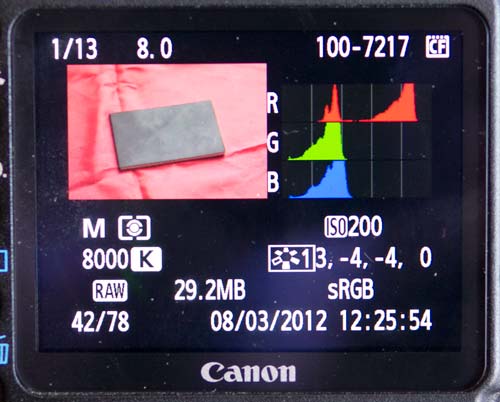 And here is the raw data histogram: 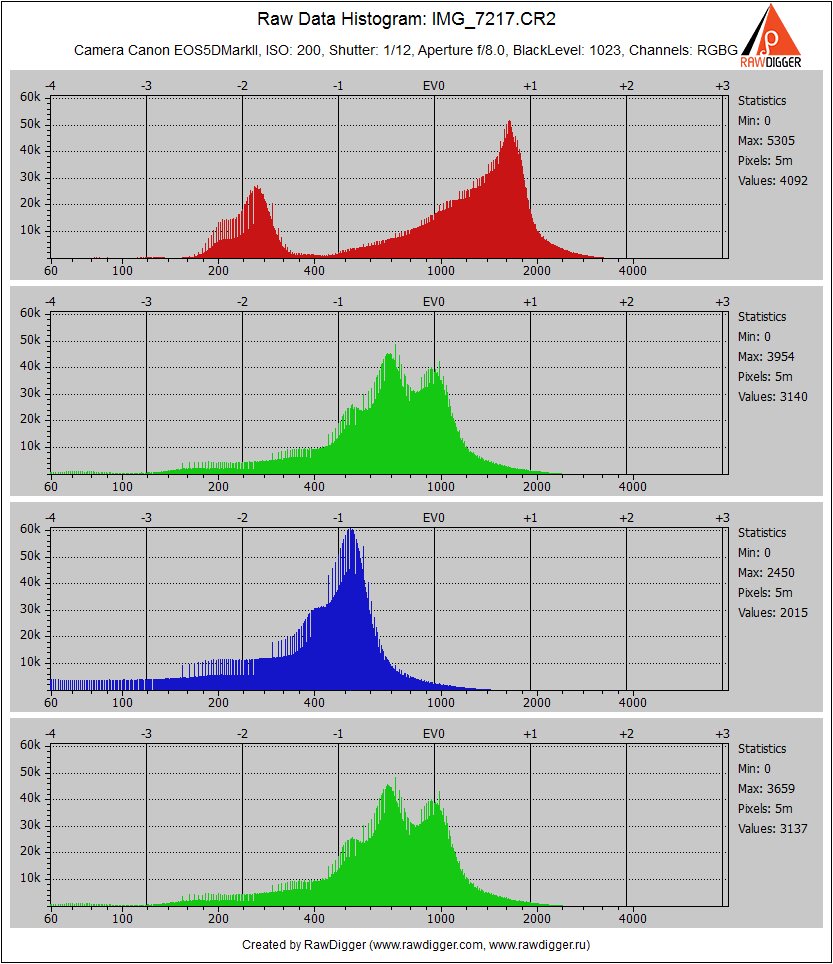 The histograms show some family resemblance, but that s it. The red channel camera histogram does not indicate that there is an additional 1.5 stop headroom. If you eyeball it, it doesn't appear to be more than half a stop.

Let s see where the overexposure is indicated and where it actually happens. Lets start with a lowered contrast setting, which worked well with the previous shot, where the bright background was neutral.

A noticeable (but not fatal) overexposure starts at 1/2s f/8.

Neither the camera nor the histograms indicate the overexposure. 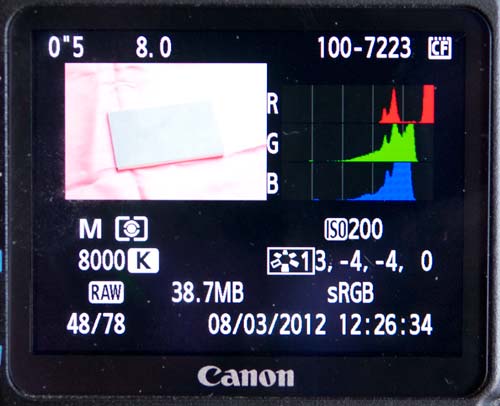 If you look at the raw data, the overexposure has started (60k pixels in the red channel are saturated): 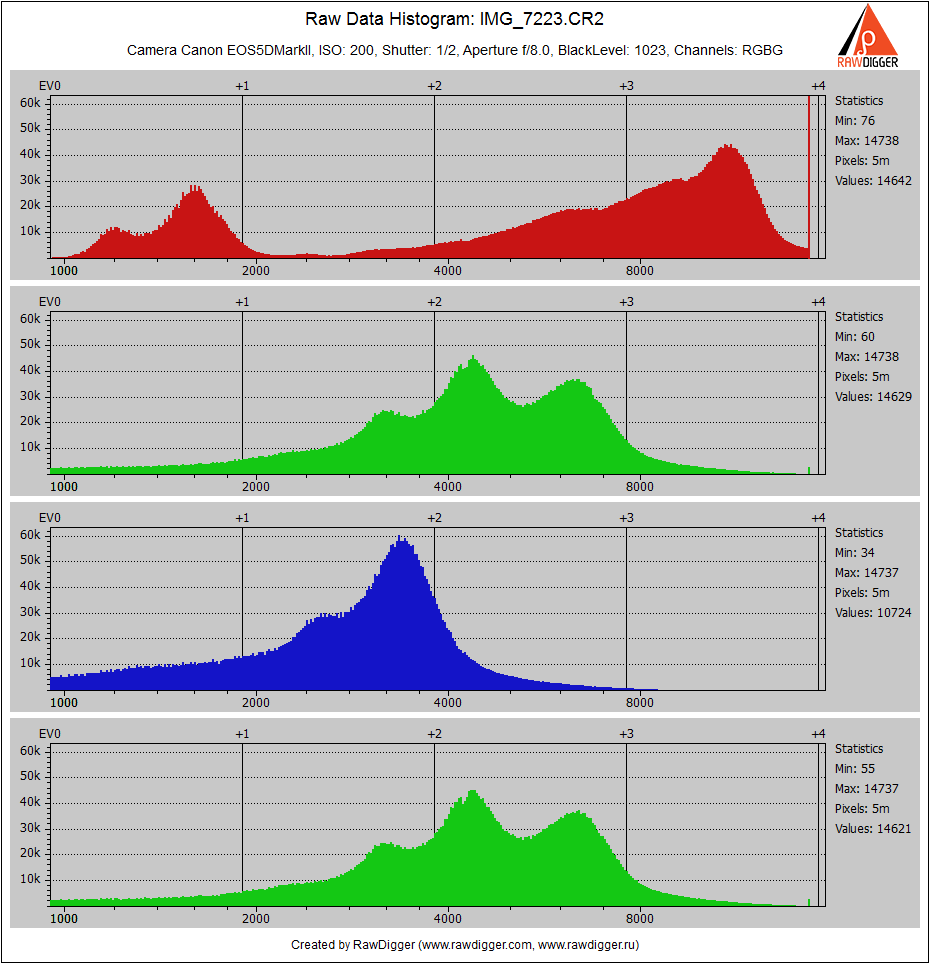 Some degree of camera indication of oversaturation starts at 1.0s-f/8 (small black dots on the image): 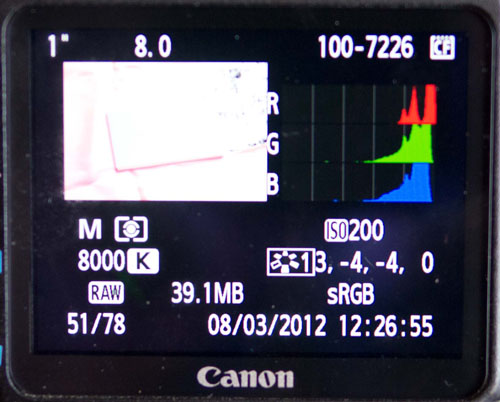 The raw histogram shows that the image is blown out in the red channel, and judging by the amount of pixels reaching maximum values (more than 2 million), this is happening in all of the red background. 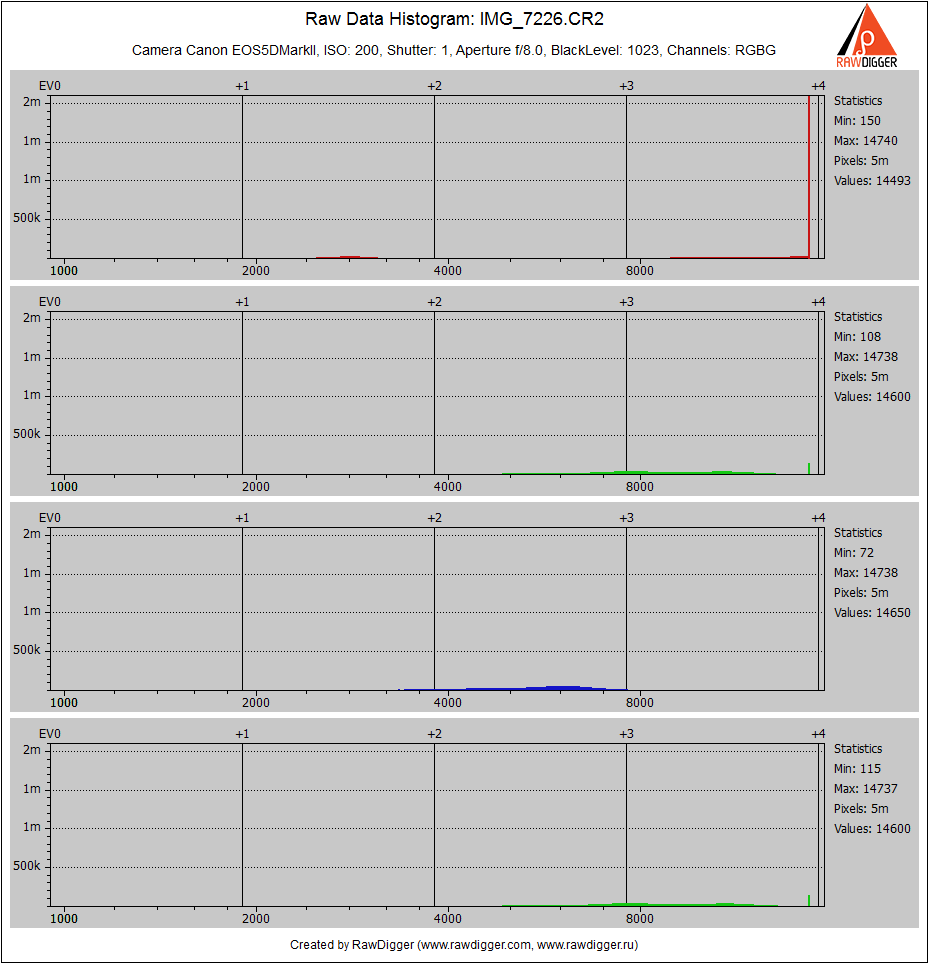 Therefore, with the low contrast setting, which worked well with the neutral background, the camera delays the overexposure indication by about 1 stop.

With a normal contrast setting (profile Neutral w/o modifications), the overexposure indication in the red channel starts at 0.6s-f/8, which is 0.3 stops after the overexposure actually happens.

The histogram of a grey map exposed according to the exposure meter, makes you wonder. The range between the red and green channels is too great, and with a normal white balance, such a range corresponds to at least three stops. 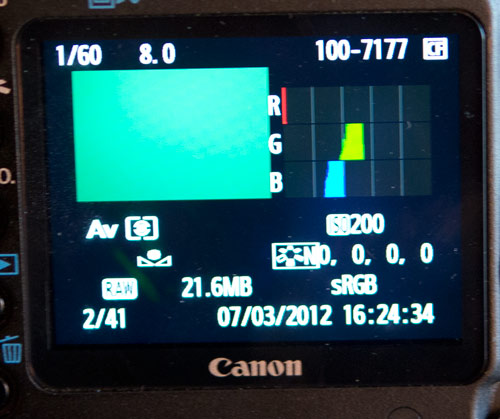 The raw histogram is completely predictable, with a 1.5 stop range between the green and red channels. 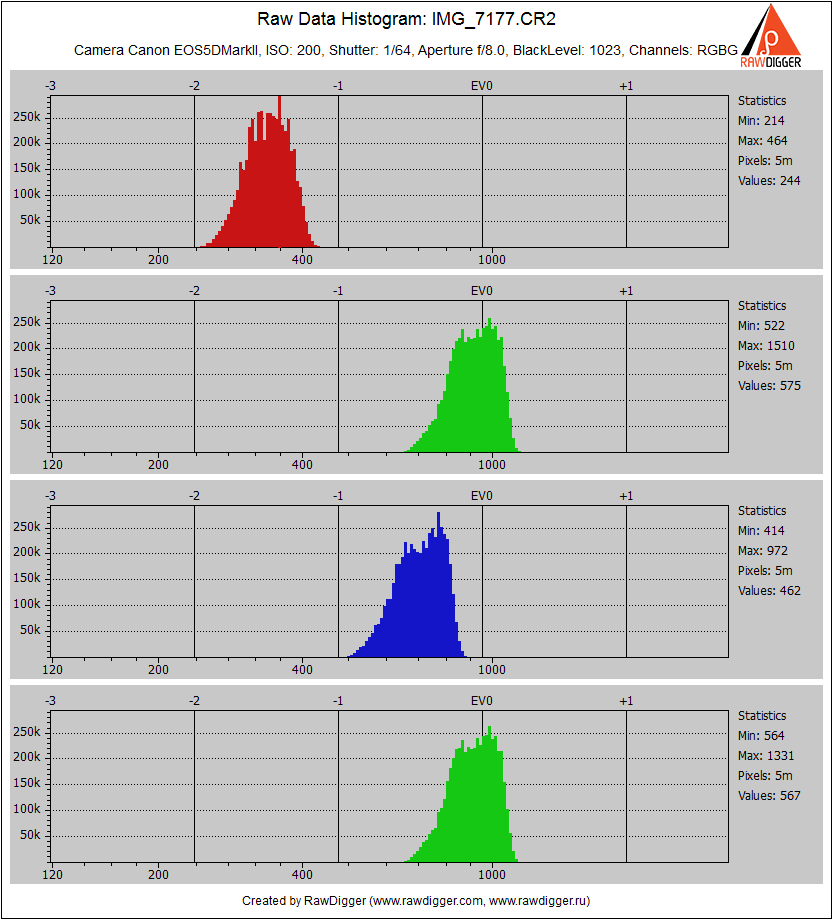 A shot with two targets 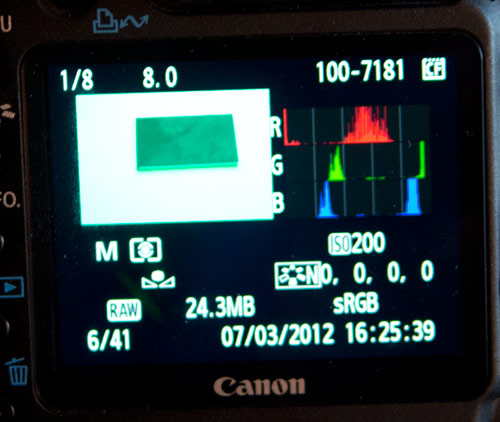 The raw data histogram is quite different. The distance between the right green peak and the left red peak is about 4.5 stops, which means that the range of the camera histogram given a UniWB and the given contrast settings is not 6 stops, as in the previous measurement series, but no greater than 4.5 (probably even less). 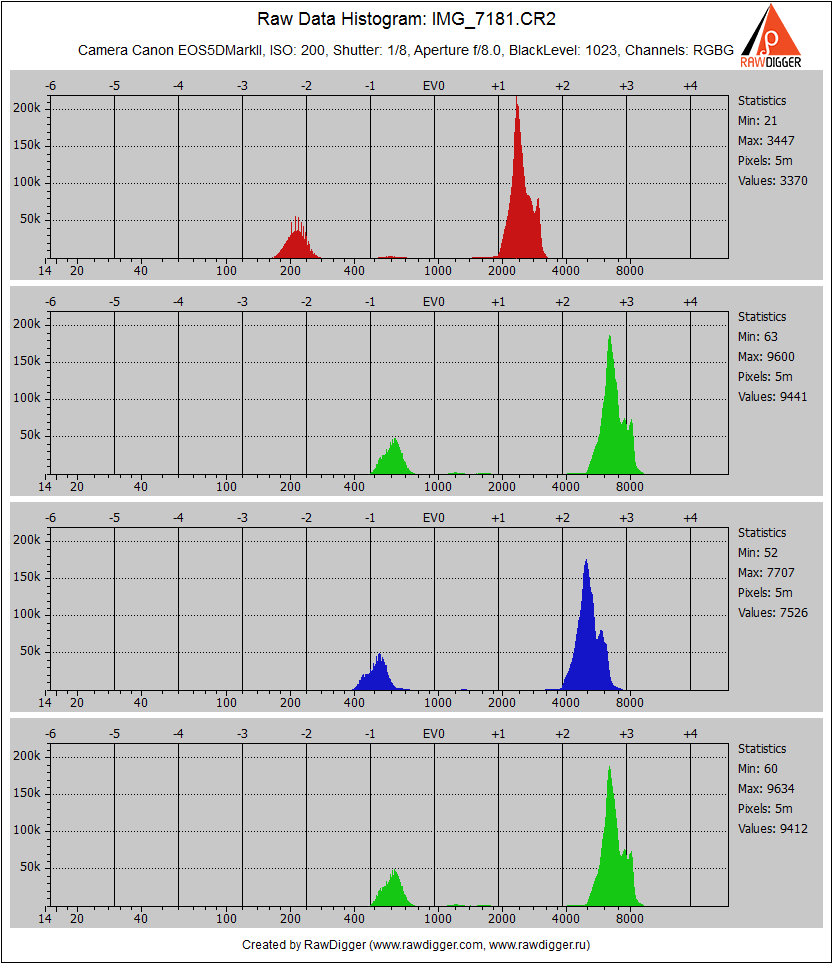 With normal contrast settings, the oversaturation indication starts at 1/3s f/8. According to the raw data, the shot is very overexposed. 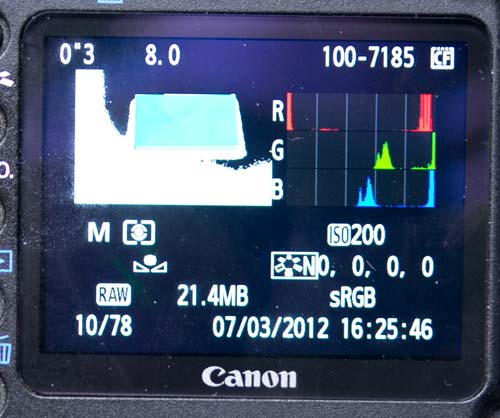 Raw histogram of the same image: 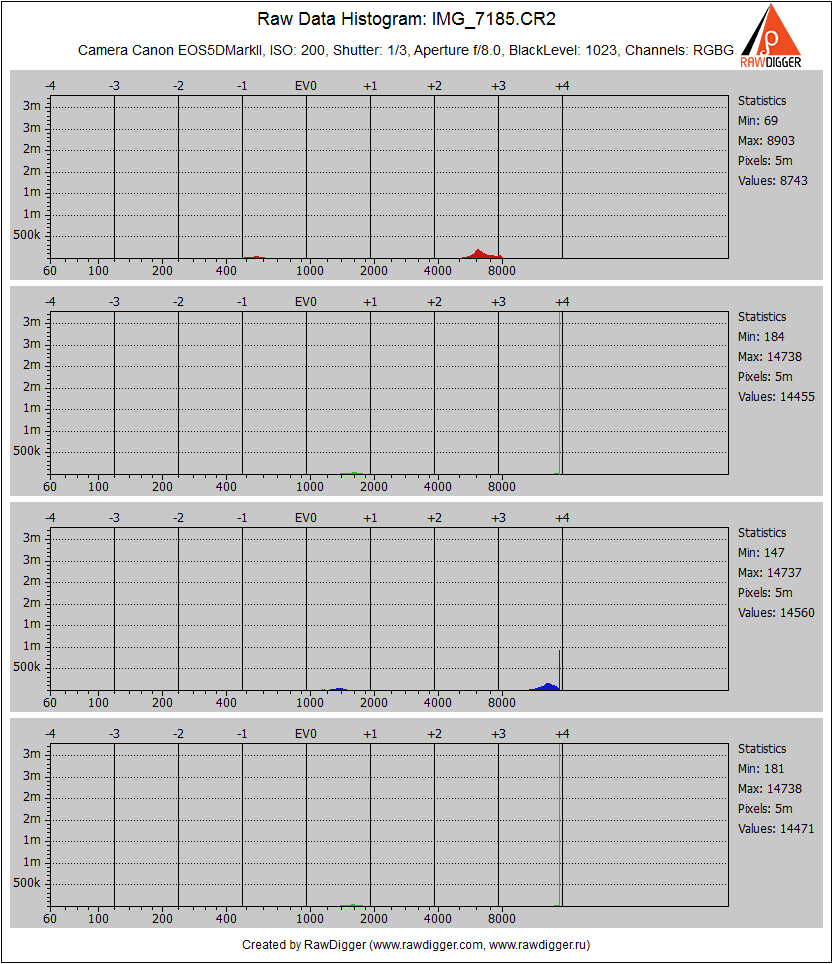 If you set the contrast and saturation to the maximum values, then everything is much better, and the indication is practically perfect.

The camera starts showing an overexposure at 0.4s-f/8: 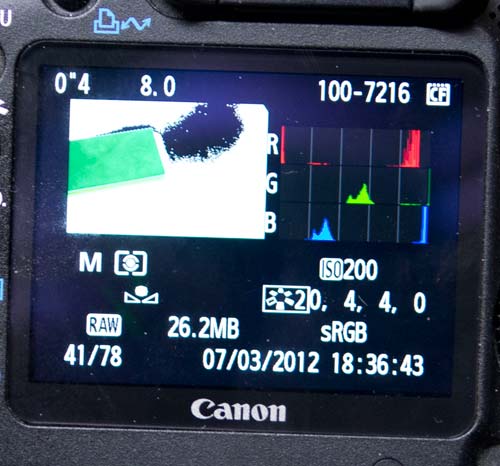 The raw histogram also shows the very start of an overexposure (the green channel has a few maximum-value pixels): 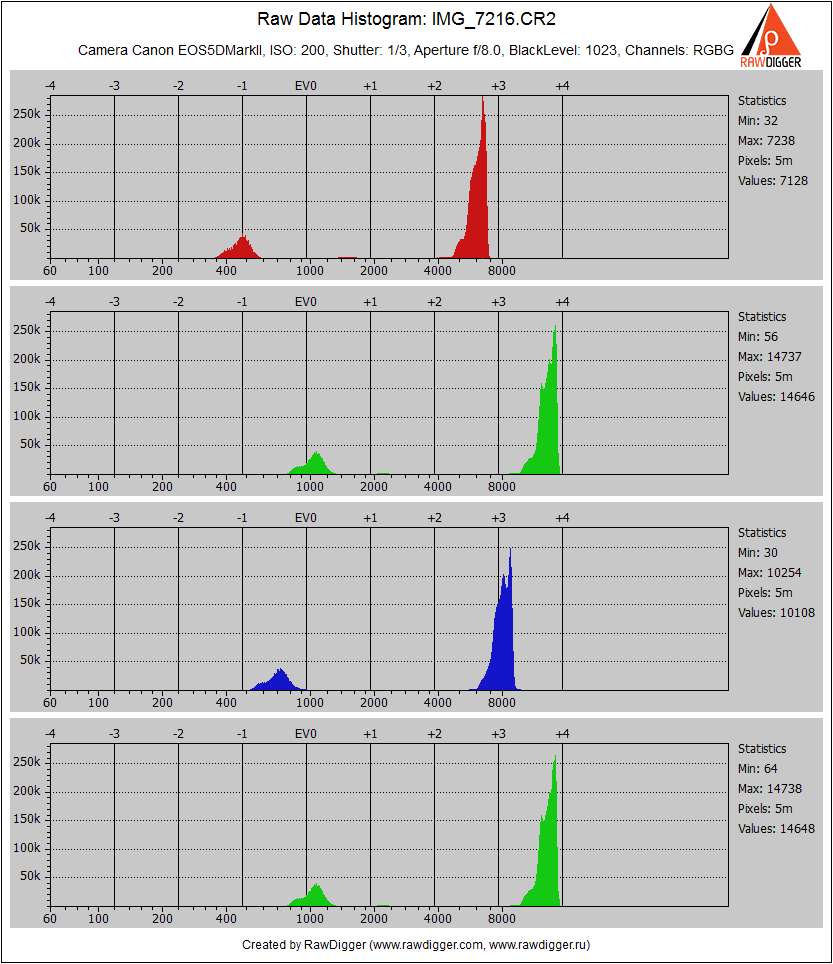 Maybe, the camera contrast setting can be lowered slightly, as the camera is being too wary.

We decided to not torture the reader with an overabundance of pictures, so we will show two pairs, both with the camera contrast at the max.

1/2s f/8 the camera doesn't indicate anything, and the raw data shows a minimal overexposure, which can be neglected. 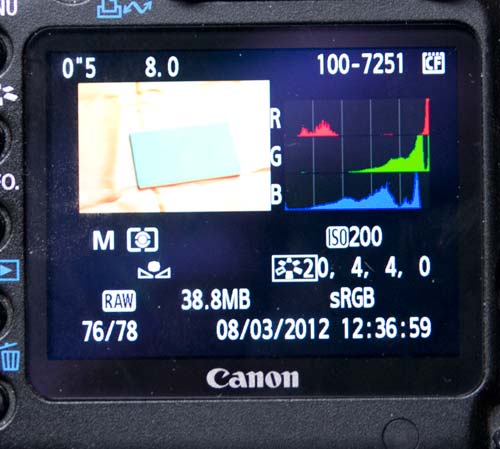 The same is visible on the raw data histogram: 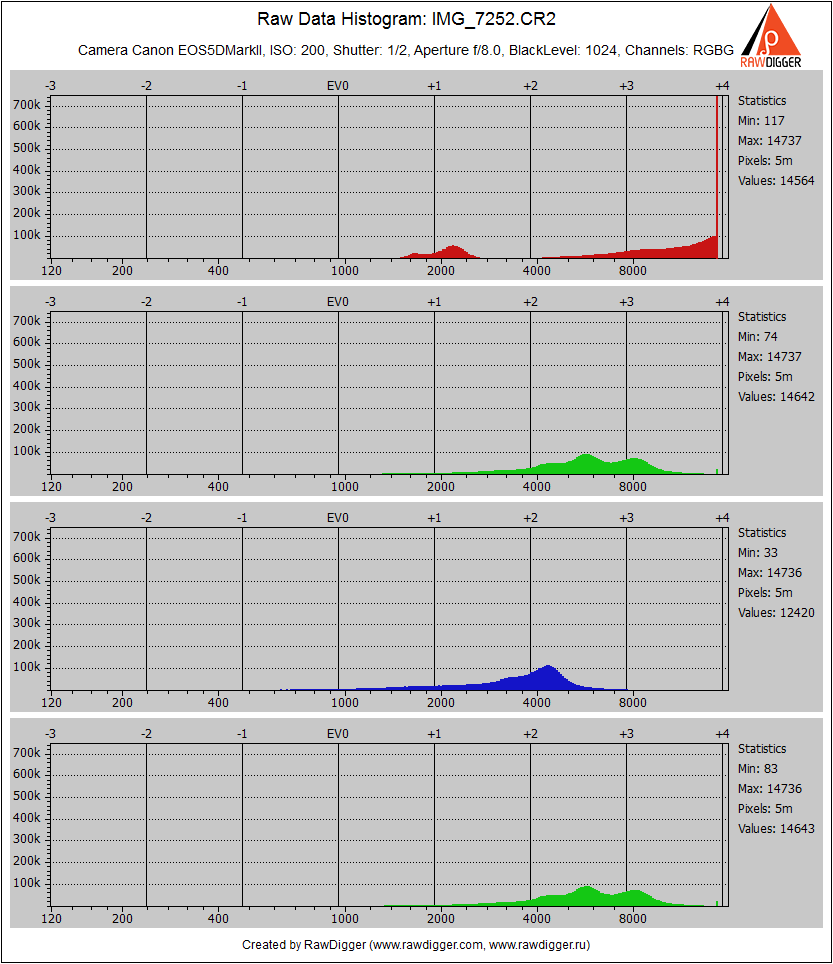 Therefore, the max contrast setting, along with UniWB, allow us to sufficiently accurately control the overexposure using the built-in camera tools. There are small errors, but they are within 0.3EV.

In standard (i.e. corresponding to the shooting conditions) white balance settings, the camera histogram and the camera overexposure indicator cannot be used to control overexposure.

When using UniWB, the value of the histogram is decreased, since the tonal range is decreased, and there are unexplained artifacts.

Nevertheless, the UniWB mode, combined with a max contrast setting allows us to sufficiently accurately (within 0.3 EV) control the overexposed areas of an image. The same setting works for both neutral and colored highlights.