Some Internet discussions claim that it is easier to push shadows up on one camera model compared to another one. Turns out, such an impression may result from a certain trick. First, let’s see the trick, and next we will expose it.

Das Kunststück, or, The Trick

Let’s take a RAW file (from an Olympus E-M1, first version of the camera) and two DNGs derived from it via different means.

You can see for yourself that the RAW data in those three files is totally identical (click on the images to see better):

Now let’s open those files in Adobe Camera Raw and see how they look (again, you can click to zoom): 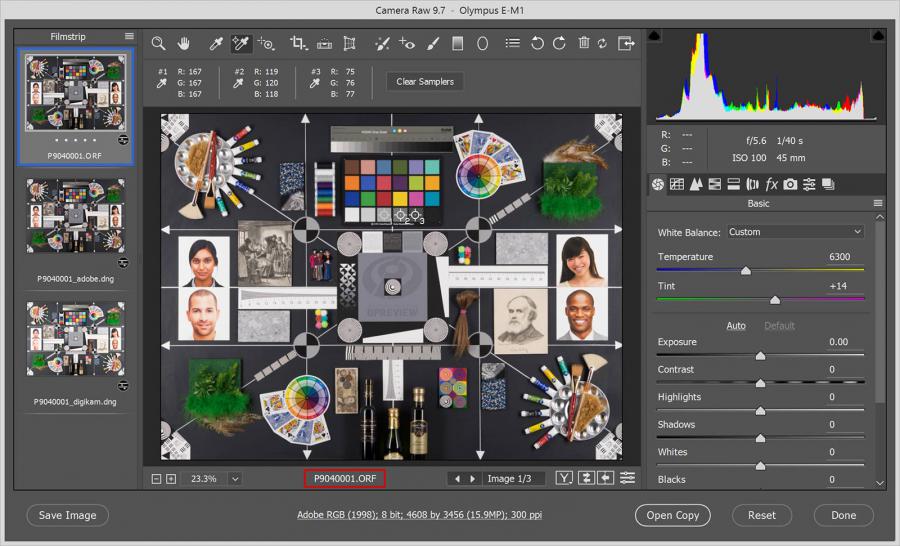 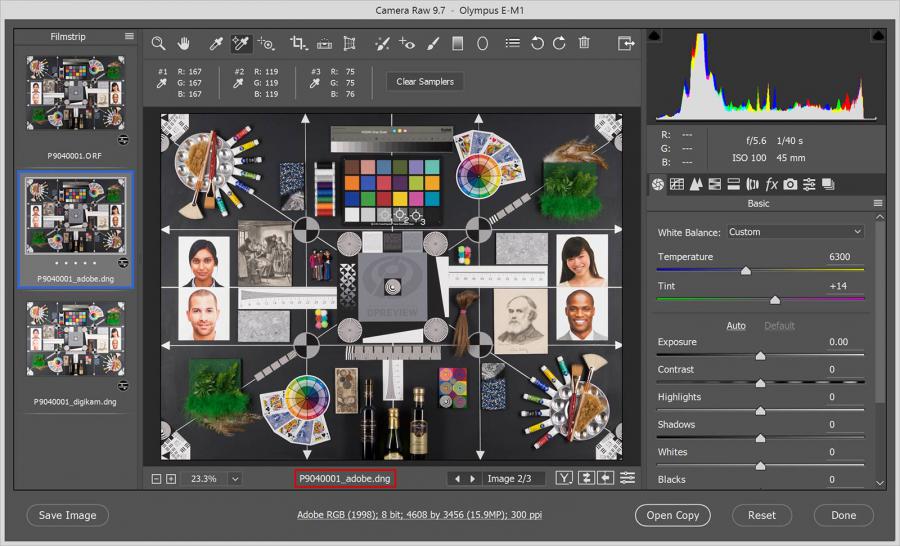 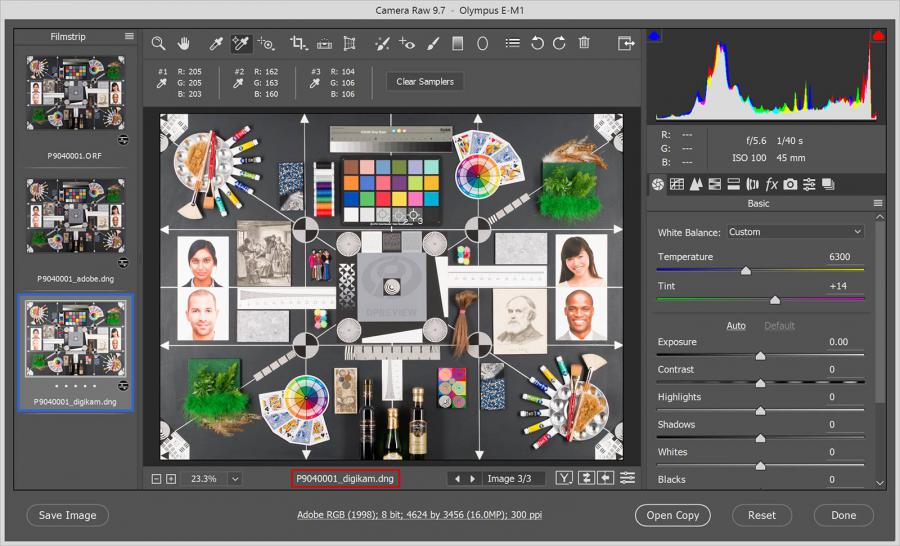 The difference is immediately visible to the eye (even in the preview), but to facilitate the comparison we’ve set three samplers on each of the screens, probing the same three grey patches of the ColorChecker.

If we take the middle of the three samplers, it’s almost exactly middle grey on the first two files (the value = 119), while the third file (value = 162) has a brightness difference coefficient of 1.97, which constitutes nearly an entire photographic stop: (162/119)^2.2 ≈ 1.97, here we take the ratio to the power of 2.2 to un-do gamma, getting the linear values.

Why is this? Both DNG files result from converting the original ORF file (Figure 1. and Figure 4.) to DNG. The RAW data is preserved and undistinguishable between the three, as we just saw in RawDigger, and yet…

We will answer this one without further ado.

The difference is in the metadata! In particular, the effect above is controlled by the BaselineExposure metadata tag, present in DNG:

A careful reader, having looked at the names of the files in the screenshots, will know that the third shot was converted to DNG with the aid of digiKam, the second with Adobe DNG Converter (version 9.7). Correspondingly, the Adobe converter set the necessary tag in the DNG (with a value to replicate their own processing of the original ORF file), while digiKam recorded the value as zero.

More of The Trick

Let’s discuss another shot, taken at ISO 200 and two DNG “derivatives”, obtained using the same two converters as in previous, Adobe DNG Converter and digiKam. The RAW histograms of all three are once again identical, so we are only going to show the histogram of the original RAW (ORF) file:

The reason is the same:

The Moral of The Story

If we compare two cameras (or different settings for the same camera; or even the same shot from the same camera but processed in different ways), and we’re doing this by looking at two files in a RAW converter, we need to:

Because, you know, pushing the middle grey up and down for a nearly 1.5 stop total difference (as seen in the examples above), that’s a pretty big deal.

This means that, of course, one should first look at the original, unprocessed data (in RawDigger, for example), and only having dealt with the differences there, right in the raw data, to move on to comparing the results of processing.

In this case, the explanation is quite simple:

This becomes possible for the simple reason that “ISO light sensitivity” for RAW data isn’t defined in any way. The existing ISO 12232:2006 standard talks about how the out-of-camera JPEG should behave, but doesn’t mention the RAW.

In practice, the RAW value that corresponds to middle grey is different for different cameras, even if normalized to the maximum and calculated in percent. Moreover, it can even be different for the same camera, depending on settings and algorithms for Auto Exposure. The proverbial 18% is more characteristic for the ISO settings below the base camera ISO. The current mid-grey in RAW is 12.7% and below, with the emphasis on “below”.

Using the Olympus as an example (the vendor puts the “middle grey” value in the second field of the RAW calibration tag (Sensor Calibration on EXIFtool lingo), so one doesn’t have to guess what the manufacturer intended, but can know outright), for the given camera:

In practice that means that under the same lighting conditions, using the same exposure meter, but with different camera settings, we can get, for example:

If we take different cameras from the same vendor, then we find out that the middle grey jumps around. For example, the E-M1-II, in regular mode, has it at level 206, which is to say 0.5 steps below than that of E-M1. Meanwhile, ISO 64 mode has the same calibration as that of the camera’s first version (646).

Some might ask: "Why do they (camera manufacturers) do this?

And the answer would be: “Because we can!”

When lowering the calibration level for the middle grey in RAW, two useful effects emerge:

But, everything has its cost:

Modern cameras have little noise (relative to what it was 5-10 years ago) and this cost is considered worth it.

But this cost has to be paid always (when shooting “according to the exposure meter”), even with low contrast scenes, which don’t need extra room in the highlights at all.

What Happens Later, after the Shoot?

The in-camera JPEG engine returns the middle grey to its proper place, because the standard ordered it to.

The designers of RAW converters are forcibly doing the same because their (mass) user expects to see, upon opening the file, the same thing that he sees on the back of the camera (and if that doesn’t happen, then they’re flooded with questions, one of the most common for new RPP users being “why is everything so dark?”).

In the case of Adobe products, this is expressed as:

While we are on it, let’s take a look, for example, at the RAW values for the green channel on the same grey patch we already sampled in ACR as middle grey, 118. 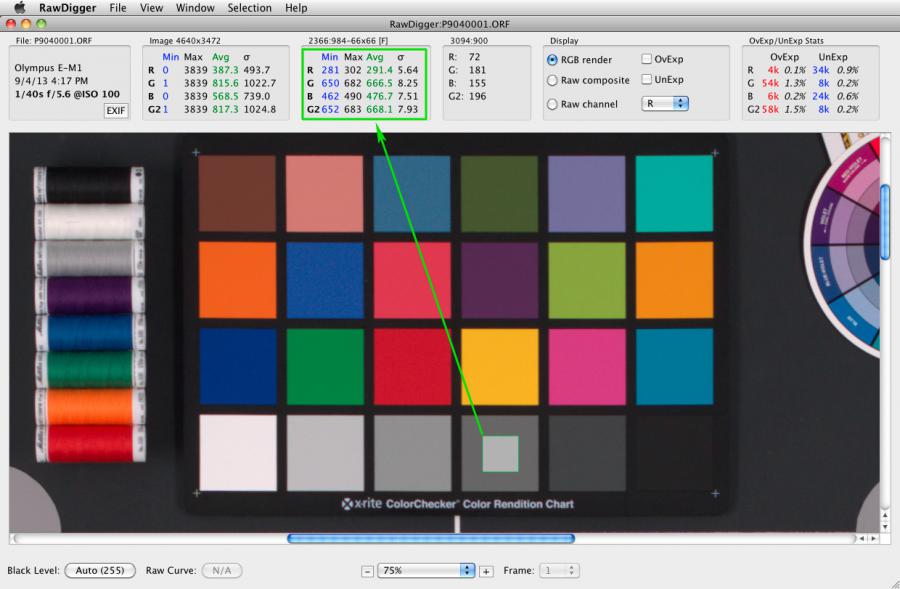 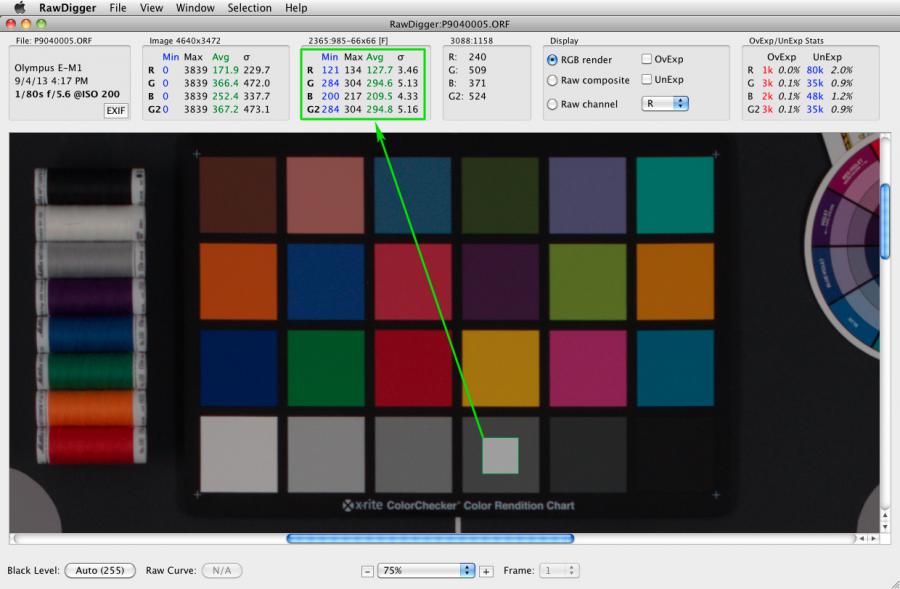 Meanwhile, if we look at the render of the un-corrected DNG render, we see values of 162 and 102, which, taking gamma 2.2 into account corresponds to 2.77x difference, or almost exactly 1.5 stops. It seems that CameraRaw, by itself, added another 0.3EV to the difference, increasing the contrast (this is with all sliders set to “zero”).

Consider the following: we’re comparing shots from a Canon and an Olympus E-M1, two shots taken “at ISO 100” (or at least, that’s what the EXIF says). In reality, the Olympus is set to ISO ~220, and the shot was overexposed by 1.25 stops.

So, would it be sensible to compare these shots by their noise?

There are two possible answers here, of course:

Both answers have a right to exist, but the second one, in our view, seriously complicates life for those photographers who use two (or more) cameras at once or are switching between different cameras.

This complicates the problem of finding similar “reference points” even more.

Back to Where We Started

As a matter of fact, this particular text was triggered by a certain rather strongly expressed opinion that Olympus E-M1-II runs circles around original E-M1 when it comes to pushing shadows.

This camera isn’t supported by Adobe yet, and the only way to run its shots through Lightroom/ACR is by converting it with digiKam and thus setting BaselineExposure to 0.

Comparison shots from other cameras, already “known” to Lr/ACR, can be opened directly, without the aid of a third-party DNG converter, and thus (as we discussed above) may have the middle grey calibration point adjusted “the Adobe way”.

As it happens, an Adobe-supported camera, which means that the calibration to the mid-point will be applied in conversion from RAW (easy to figure out the value of this hidden compensation, but nobody seems to bother), could be compared to a new, yet unknown to Adobe software, camera, with 0 compensation for the calibration point.

The results of such a comparison could be as amazing as wrong.